Karl Mikolka was accepted by Alois Podhajsky to the Spanish Riding School in Vienna in 1955 at the age of 19.  In 1967 he achieved the rank of Chief Rider, or Oberreiter.  He left the Spanish Riding School in 1968 and moved to Brazil where he worked to create a nucleus of a Brazilian National Dressage Team.  He relocated in 1972 to the US and has remained here since working hard to promote and preserve the Classical Principles.

He has provided his students with a sound foundation for the well-being of their horses and their own benefit, only asking that they carry on and remain loyal to the System. He has been faithful to his alma mater by accepting all types of horses – not just those of carefully controlled breeding – as well as aspiring riders from all walks of life, rather than concentrating only on Olympic material.

The greatest satisfaction an instructor or coach can come in contact with is when his students try their best in becoming like their teacher.

When I was an apprentice of Doshinkan Karatedo I was told a good pupil will have to go through three stages of development:

Third- NARERU- make a habit of it

LaDene Scott is a perfect example of a dedicated disciple of Classical Horsemanship as she managed to follow those three steps consistently all the way through her own equestrian education.

LaDene devoted an equal amount of time improving herself before she attempted to train horses and by doing so she discovered the importance of becoming a thinking rider who, only then will be able to create the thinking horse, the conditio sine qua non for finding the utmost harmony between horse and rider.

LaDene Scott, with the help of my longest working student Anita Adams, exceeded all my expectations and can consider herself worthy of being one of the few true pillars of Classical Horsemanship. 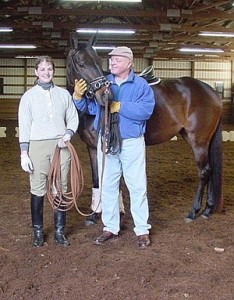